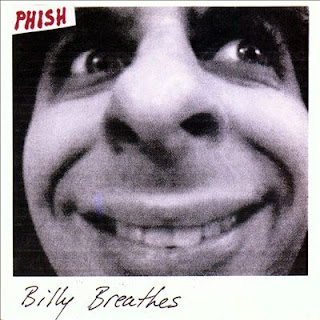 I first saw this album's cover and was slightly unsettled by its unfortunate cosmetic it was
sporting. This factor is most likely the main reason it took me a substantial amount of time
to listen to it, and only then it was because my friend very graciously gave it to me as a gift.
To me this really says something, because to me an album's physical presentation may be
just as if not more important financially than the actual content of the album. But,
unbeknownst to me, Billy had something in store for me, and it wasn't disappointing as he
lead me to believe.

Phish was already gathering steam from their getting signed on in '89 and the release of
their first album in the same year. The albums that were released from that year till '96 were,
as their dedicated fan-base of "Phish-heads" proclaims, some of their best material.
Amongst these were the aforementioned debut, Lawn Boy (1990), Picture of Nectar (1992),
and Rift (1993). Others like Crimes of The Mind (a collaboration with The Dude of Life)
(1994) and Hoist (1994) were less impressive but still added a few songs to the band's
repertoire to be extenuated into long, superfluous jams played in their vastly increasing
number of live shows.

1996 came around, two years after their last album, titled Billy Breathes. This was a year
before what can be undoubtedly described as one of if not the best year of Phish's career,
where Phish as a whole made around 10 million dollars from their performances played
seemingly every day. Billy Breathes was the last album to add to the collection of songs that
would be played, and it really deserves it.

Billy Breathes contains perhaps the most heartfelt and diverse music Phish has ever
performed. It blends perfectly aspects of classic american rock, jazz, acoustic, ambient, and
of course the ever-present Phish tomfoolery. There are a few short but sweet acoustic
guitar-led songs that utilize beautiful ambient soundscapes, such as 'Bliss' and 'Swept
Away'. The shorter songs also do a very good job at piecing together into a larger song if
they're placed side by side in the tracklist. Progressive rock litters the album, and although not thorough,
it is noticeable. 'Theme From the Bottom' is a very nice piece, and an early ode to Picture of
Nectar with it's lyrics and composition. The title track is very similar to it as well, though has
more folk than past Phish did.

Before I spoil anything more I suggest that you buy Billy Breathes. It is one of Phish's best
works if not THE best. If Phish isn't your taste, I'd still suggest this any day for it's creative
ability to draw you in with talent alone.