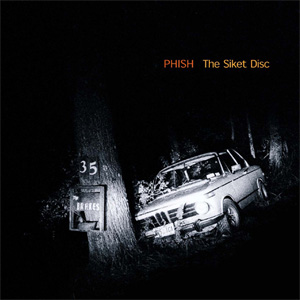 The Siket Disc is the one and only instrumental album recorded by the American band Phish. It was released via mail order to Phish fans in 1999, but wasn't in stores until 2000. The album is a very quaint little piece of obscure music, and features some pretty good material.

As aforementioned, the album consists of only instrumentals, so Anastasio's vocals are not involved in any way. However, this does lend a pro to the album where it allows him to show off his guitar skills with more prowess. The styles of the tracks revolve mostly around lounge music, with some hints of progressive rock; the entire album is extremely laid-back, and does not over-exert itself to a great extent. The album opens up with 'My Left Toe', which recycles a continuous two notes which makes for a very irritating melody and an unpleasant experience for me. However, it does lead into possibly my favorite track on the album, 'My Name is Slick'. This song subtly combines funk and lounge-jazz which makes it very fun to come back to when you're working or just want to relax. The first side ends with 'What's The Use', a Floydian-inspired epic which use blunt, 60's psychedelic humdrum with deep and echoing guitar chords to make for an interesting space rock tune. 'Quadrophonic Toppling' and 'Albert' are both short but sweet guitar/bass led songs. The former features a very hypnotic bass line by Mike Gordon, even with it featuring only a few different notes. 'The Happy Whip and Dung Song' is perhaps the most vibrant the album gets, featuring the slow muddle seen on 'What's the Use' but more chaotic guitar playing.

This album was slightly hard to critique, due to it being so minimalist in nature. A factor that has made it not too popular, but in my opinion adds very well to a certain aesthetic that it gives off. It is indeed very different from other Phish albums, but for a hard to explain reason it is one of my favorites. Mostly I believe it is from the slow and very simple style that has the instruments being lightly played instead of extremely intricately, and still being able to be fun and enthralling. I would suggest that you listen to it before you obtain it, because it is really a "different-cup-of-tea" kind of experience.

Email ThisBlogThis!Share to TwitterShare to FacebookShare to Pinterest
Music Review #23: 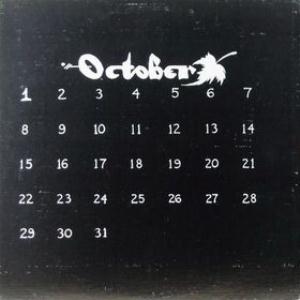 October's a band that aren't well known at all, only releasing two albums in the span of two years. They use a fairly standard jazz fusion sound with dollops of experimentation. Something that I noticed was a hint of Krautrock, mainly like Neu! or Can in their earliest incarnation. Pat Carson has a style extremely similar Jaki Liebezeit, especially on the track 'Mainspring'. At times the instruments fumble and start to trip over each-other in a haphazardly sort of way, causing for awkward segues that sometimes don't even come, causing for a song that is mainly flat and uninteresting. The production as well is rather...bad. When there are vocals they are incoherent and practically not there, and some of the background instruments can get lost in the hubbub. This little gem however is a pretty interesting look at the jazz fusion genre when it was on the cusp of a new decade, and I would suggest forthright.

Email ThisBlogThis!Share to TwitterShare to FacebookShare to Pinterest
Music Review #22: 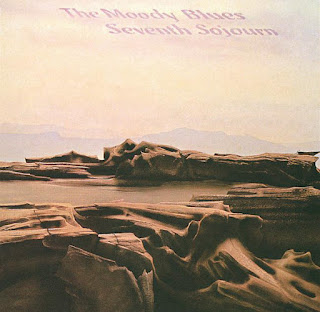 The Moody Blues had steadily edged their way into the 70's, having formed eight years prior. Seventh Sojourn, ironically enough the band's eighth album, was the last before a short hiatus the 'Blues took before re-emerging in 1977. Touted in their early days as a skillful art-rock band, Seventh Sojourn is an album that encompasses the classical influence from their earlier days, as well as more of a Simon-Garfunkelian style. Many of the songs on the album are in the vein of dreary-orchestral rock songs, with Hayward singing his breathy vocals with echoing melodies accompanying him.


Seventh Sojourn is very heavy on boisterous, climactic pieces, and from start to finish is a ride for the senses. From 'Lost In A Lost World', the choral-rock piece with lovely violin work as well as the bass riffs by Ledge, to the fast paced break-neck closer 'I'm Just A Singer (In A Rock And Roll Band)' that evens ends with clapping as if this album was just a giant spectacle with the world as it's audience. The only problem the album suffers is this level of symphonic power does sort of lose it's edge while going through a full listen. Don't get the wrong impression though, because such an experience is still highly recommended in the long-run. If you are a fan of the band or just that more loosely-interpreted side of prog, then this album is for you. One of the best albums I've heard in a while.

2016 - The Frying Pan & Thatcher
Originally written for Prog Archives on 4/30/2016.
Visit the site at www.progarchives.com
Written by Unknown at 8:46 PM No comments: