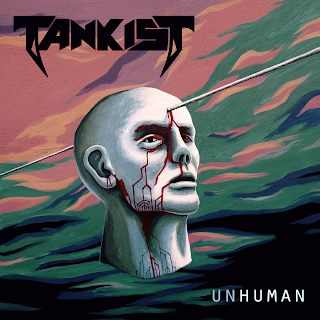 
Tankist came into the fray a few years back with little more than a "rage against" attitude and a deep-seated love for thrash acts of yore. Though this motivation alone has rarely done your average garage band favors, it combined with the talents of this Estonian group to make promise back in 2015 with their EP Be Offended. The obvious Megadeth influence combined with a decently virtuous technicality to their songwriting made them at least stand out from the hordes of modern thrash bands drenched in glittery production and faux-aggression.

Now that two years have passed in the wake of this EP and Tankist have had definite time to grow, how exactly do they fare with the daunting task of a full length LP? Not bad, turns out.  There's a definite upspike in production quality, following in the footsteps of the slew of standalone singles the band put out last year. The technical riffage is still present on many of the songs, such as 'The Plastic Age' and 'I Know What You Are!', that see Unhuman not necessarily ascending to the insanity that was Vektor's Terminal Redux, but definitely as an album with a certain level of prowess. It can't be denied that, as a mega-fan of Atheist, technicality is disavowed by any means. Similarly, things like the Voivod influence in Kevin Marks' voice, the Anvil-esque drum sound of Simo Atso, the aforementioned Megadeth sound (present mainly in many of the riffs), and other light nods to what are perhaps Tankists' influencers give the album a sort of warmness and appeal to any even slightly well-versed thrash metal fan.

Tankist aren't perfect legends though, as they do have some issues. While Unhuman might contain rather fresh ideas for the thrash metal scene, it also showcases some of the most laughably cliched ideas in thrash's history. For instance, 'Conveyor Care' does little in the way of interesting the listener not only by having a weak bass sound, but also by having a very lackluster middle section of a simple thrash 4/4 backing a weak string of riffs. Also at times Tankist can seem a bit too entrenched in their influences, bringing out the cheese of 80's metal with things like the silly "I ain't done with you yet!" voice clip at the end of 'I Know What You Are!', and similarly the occasional laughable excitement in Marks' vocals. I mean, I'm glad the dude's having fun, but sometimes it definitely ruins the mood.

However for such an obscure group as Tankist, I can readily admit how much taste these guys have for their craft. Unhuman is no rampaging monster, but it does have quite the bark nonetheless. In all, I believe with the burgeoning talents these Estonians possess, they definitely have the capability to deliver some "fucking fist-in-the-face" songs to me in the future, cause they weren't too far off this time around.


This review was requested by the band. You can request a review at fryingpanmedia@gmail.com. I'll  try to get back as soon as I can!
2017 - Frying Pan Media & Thatcher
Have a nice day!
Written by Unknown at 8:45 PM No comments: 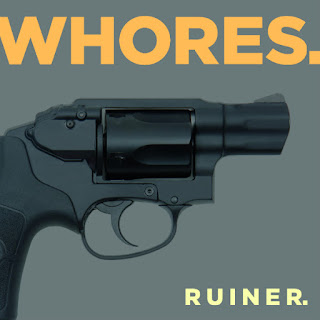 In 2016, VICE's Noisey proclaimed Atlanta's WHORES to be the "new kings of noise rock", a title that the band happily flaunts at the forefront of their self-description. Such a description though is very readily able to raise any self-respecting person's eyebrows, as the validity of it could very well be egregious at best.

Whores, or bluntly WHORES., have some credit that is needed to be given, credit that does give some respectability to Noisey's honeyed praise. The band piggybacked off of a very loyal fan-base that ate up their EPs and immense live shows, eventually gaining enough underground traction to score a debut LP in October of 2016. This is, undoubtedly, an opportunity any group of poor saps wanting to make a mark with their music would dream for. The question then remains, I suppose- what made Whores as lucky as they are? What lit the fuse, started the boulder rolling, oiled the machine, and kick-started their career with any other stupid analogy? For the answer, we'll have to go back to the beginning.

Ruiner was the first EP ever delivered by Whores, and was the first peep from the studio to be served to a public forum. Ruiner, with a cover of a sleek .45 with the band's title in brash, unrelenting capitals and a title that invokes destruction, is bound to make an impact even before the music starts. But as the music starts, you quickly discern the source of Whores' success. Their sound. A monumental drum entrance and guitar screeches welcomes in the crushing vigor of 'Daddy's Money', the opening track. Every element present on this track gives credence as to how Whores has appealed to the metalhead market. Right off the bat it makes it clear that they are distancing themselves from the scores of Crowbar and Melvins imitators with the noise rock style Noisey praised them for being the kings of. It almost makes Whores seem like a reincarnation to their Southern brethren in Florida, such as the aforementioned Floor, Cavity and others- all bands who also play sludge with hefty dollops of wrenching feedback dolloped on to evoke a certain amount of rage and distortion not seen by most other metal bands. The whole EP flagrantly uses this heavenly technique, but with each song having a unique hook that propels it forward. Like heavy machine, Ruiner proceeds with a lumbering grace not unlike a titan from Greek mythos. The album stops just the way it begins, pounding staccato drums overlayed by heavy, feedback-laden riffs, wrapping this demonic automaton in a masterful bow.

Christian Lembach's larger-than-life person and voice, Travis Owen pounding his set like a boxer and Jack Schultz's thundering bass-work all make Whores quite the fun equation, proving once again that the underground holds the best secrets. It's safe to say that, even in the fetal stages, Whores definitely warrants some sort of kingship.