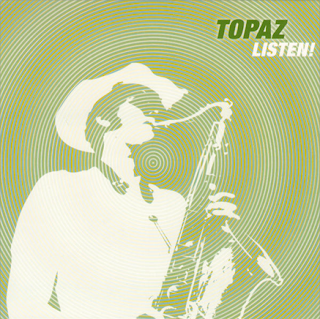 
Cranking out their debut in the bright Spring of 1999, NYC jazzists ambitiously forged ahead with the determination to make a name for themselves. Listen!, the follow-up record, makes its presence known by giving a silent nod to the jazz greats of yore like Herbie Hancock or Miles Davis and their grandfathering of jazz fusion and jazz funk. But a simple recitation of said artists' styles would not only be lazy but counter-intuitive to McGarrigle's dream to make a name for himself in the New York City streets as a distinguished member of his craft.

Listen! is Topaz' call to action, and duly a showcase of what this small-time NYC group could do. They start out on a brusque foot with a sweeping cover of Donald Byrd's 1972 funk classic 'The Emperor', and is one the big indicators of a duality present on this record as it leads directly into the asimilar 'Let Go'- a freewheeling fun side, and a more eloquent, thoughtful side. The former makes itself clear on the powerhouses 'Rez' and 'Let Go', whilst the latter is abundant on the elongated and often psychedelic-laden jams like 'Dharma' or even the title track. This duality truly keeps this record afloat even throughout the more dull and repetitive moments, although not exactly numerous, with the anticipation of what new bass groove, keyboard tone, or tempo change will come next always keeps you on your toes. Even the soppy 'Peyote Eyes' has quite the inviting atmosphere and is appropriate even as it follows up the rocker of 'Rez', although to call the vocals appropriate to its atmosphere would be a bit of a stretch. Also, be ready to rapidly digest sometimes overwhelming torrent of dynamic sound, because "fill" seems to be one of the only words in McGarrigle and crew's lexicon.

The complete experience this album delivers is a warm and inviting one. Perhaps Topaz will never ascend to the greats, or frankly ascend from being split-up, they've left quite an impact with the succotash they've given me. 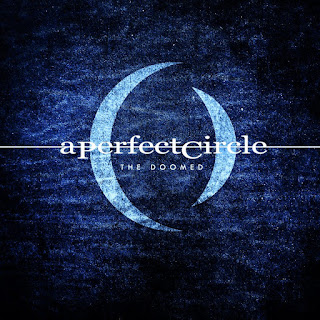 A Perfect Circle
The Doomed
2017
BMG

Thirteen years of baited breath and whispered rumors followed A Perfect Circle following their 2004 cover album eMOTIVe and subsequent hiatus. This effect followed both them and Tool, the other project featuring the frontman vocalist extraordinaire Maynard Keenan, as both bands of which fell into what seemed like an irreparable slumber filled with insubstantial announcements of various happenings, none of which came or seemed would come to fruition.

But Tool in fact came back with a bang with a surprise reunion tour in January of 2016, and it was only expected by the collective conscience of Keenan to give a fair shake to his sister band as well. As expected, a little over a year later APC also received recognition with not only a similar tour but one supporting the release of a new single (/rumored album) titled 'The Doomed'. Remember, this single is the first thing this legendary act has created in almost a decade and a half, so expectations are higher than an elephant's ear.

'The Doomed' has arrived at a perfect time, particularly for me, at a time when I am personally starved of new and enthralling uniqueness on the rock scene, let alone the hard rock/metal scene. It has got to be one of the most interesting songs released over the span of this entire year, and this is for a variety of reasons. First, for those who care to know, this song does in fact synthesize previously established sounds on other APC records, particular the past two. In other words Thirteenth Step and the good stuff from eMOTIVe, especially the original song from the latter, 'Passive'. This means great big burly drums (by new member Jeff Friedl replacing long-time member Josh Freese) that shift from simplistic beginner fills to war-like timbre that fills the stage heftily. This coincides perfectly with Keenan's vocal delivery- one of his absolute best in my opinion- which similarly shifts from scratchy and raw (akin to the Tool trademark) to almost saddened, quiet bridges. These bridges lament of a rapture-like event, as a "new Christ" comes to bless/doom those he deems worthy or not. The blessed are portrayed as undeserving (the fornicates, the rich, the envious, etc.) as they sit on the proverbial skeletons of the deserving doomed (the pious, the pure-of-heart, the peaceful). This lyrical environment is not only fresh but also almost bemusingly expressive. Although such greatness is unsurprising from such an act as A Perfect Circle, the content they deliver is straightforward yet thought-provoking, panicked yet collected, emotional yet headstrong. All in perfect harmony with eachother.

I'm not sure why I felt the need to write such a massive review for a single track, but a band that is so important to me and my past releasing such satisfying content is something I'm not willing to slip under my radar so easily. Fantastic.