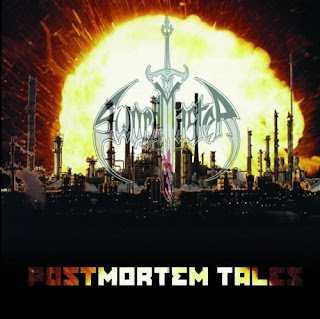 
Here's a funny story: when I was seven or eight years old, I fantasized about having my own rock band. I had consumed volumes of Breaking Benjamin and Green Day, and I aspired to one day be mentioned alongside the likes of Benjamin Burnley and Billy Joel Armstrong. Said desire isn't really part of my life anymore, but what I can tell you is that during this time I was a kid who loved to plan out things. Hardly any of these things came to fruition, but regardless I loved plotting my dreams in large itineraries and graphics. For this rock band dream, I conjured a single-word name for the band, being...well, Swordmaster. I drew covers of explosions and fire and flying eagles for imaginary "Swordmaster albums", and it entertained the hell out of me.

Well, flash-forward to about a decade later and here I am, with a disc in my hand from a band called Swordmaster titled Postmortem Tales. And would you look at that- explosions on the cover. Go figure.

It's safe to say my past alone propelled me toward this particular album, but I remained curious to discover the actual contents. What lies inside this particular album is at least partially interesting- Swordmaster is apparently a Swedish death-thrash band that made their marks prior to this 1997 studio debut with a black metal themed demo and a split with the Norway-based Zyklon-B. While their genre shift is definitely evident from this record, palpable nuggets of their black metal past are still present in areas like Andreas Bergh's vocal work and the droning ripple of the dual guitars. Upon first listen, I was a bit skeptical of the whole piece and it's nature as an "obscure but boring thrash release". While listening through though I was pleasantly surprised at a variety of satisfying tidbits that did well to throw a wrench into the mix of what would otherwise be a dreadfully monotonous work.

For one, Terror (aka Niklas Rudolfsson) on the skins is quite the piece of work. Owe it to the production (which is quite good for such an indie release) or what have you, but his zealous, machinery-esque drum sound is quite entertaining and fitting, and is heeded by the fact that he is quite impressive with the more rapid fills and tempo changes. Another great part of this album is its surprising eclecticism. Swordmaster not only dabble in death metal and black metal, but also in some more melodic parts such as on 'Blood Legacy' and 'Past Redemption', the band hits some notes that would not be out of place on a power metal album. Such elasticity is extremely refreshing, keeping you on your feet at all times prepared for a different sonic onslaught. The third and final noticeable feature of Postmortem Tales is the above-par songwriting. As previously mentioned, the album has a rather eclectic nature and isn't shy to pull in different metal sounds to create a fun ride. But such eclecticism wouldn't be able to function if it weren't for the songwriting, which is particularly enjoyable due to how fast everything travels. Sometimes it feels almost progressive in terms how many guitar solos and drum fills can be jammed into a simple minute of playing time.

But Postmortem Tales isn't all great, because a few things indeed hamper it. Sometimes the drums and tempo lean a bit too heavily on the thrash 4/4, a metal cliche that haunts even the best of bands. Luckily as stated before, sophisticated drum fills do well to add at least some flavor, as do the melodic guitar solos. Sometimes the vocals can grow a bit cliche as well, but honestly I wouldn't expect much more from a band still clinging a bit to their roots and is still trying to find their sound.

In all, this little gem is a romp that packs quite a punch in some areas. Definitely a punch big enough to give it the edge over much of Swordmaster's peers. I'd say check it out if you've got 45 minutes to spare. 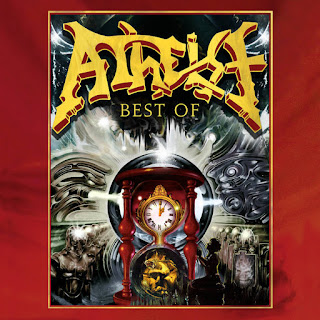 Atheist
The Best Of Atheist
2017
Season of Mist

Ever wanted to own a major chunk of Atheist's discography without needing to purchase 2005's The Collection for upwards of $60? Fear not, a solution is here!

After seven long years following Atheist's last studio album Jupiter, the band finally decided to digitally release their first ever compilation album to date- and what a compilation it is! In true-to-form fashion Atheist grab the most sonically insane and cosmic songs from their studio albums (as well as a live version of 'Mother Man' from Live At Wacken 2009) in a massive 22-track corpus. Forthright this puts The Best Of leagues ahead of other death metal contemporaries' works like Death's Best Of in '92 or Nile's Legacy of the Catacombs in '07, granted both rather good releases, simply from the vastness of the song selection. Especially considering Atheist's relatively small discography, 90 minutes of pure action may seem a bit hefty at first, but for only $10 (roughly €8.50 for you Europeans) from Bandcamp it is a fairly free-and-easy deal compared to another compilation that would front you the same price but with half the content.

This album is a perfect introductory release for beginners and also a good pickup for familiars. The only gripes I have with it are the fact that there's no physical release, because I prefer lending actual tangible material to a hypothetical beginner depending on the circumstances, and the fact that my favorite song 'Why Bother?' from Piece of Time is not present. Maybe they took the title a bit too literally? 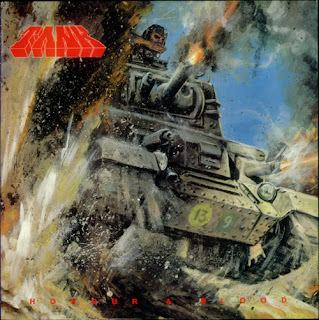 
"Do you remember that I felt so bad that you'd been blown away for good?"


Tank's story is one of frontman and bassist Algy Ward slowly detaching himself from his past in The Damned- slinking slowly farther and farther away from the punk rock he had been playing a year prior to him forming Tank. But, just like contemporaries Motörhead, the band stayed attached to their roots firmly, combining the newborn New Wave of British Heavy Metal with the youthful exuberance of punk.

As Tank moved more and more onward however so evolved their music. The punk sensibilities became thinner and thinner as they broached further into the 80's, and by the time 1984 rolled around Tank had dropped the tomfoolery. This new album, brazenly embossed with an explosive military-style cover that would make even Sabaton blush, shows Tank at their most balls deep in this new medium. The vivacious Honour and Blood bears the brunt of some of the most badass metal to come from the early 80's. Each drum hit clicks like the hammer of a gun, no matter how simplistic the beat (which they are often not, thank god) may be. Each layered guitar lick reflects off itself and it's rippling bass counterpart to create a cacophony of chaos at each turn. This is of course without mention of Ward's vocal work, which is reflected particularly well on the force ten hurricane opener 'The War Drags Ever On' and the title track. No screeching or castrato stuff here- just brash, primitive growls...as it should be.

The sharp sonic assault created on multiple occasions are some of the finest that this particular scene has to offer, and can work in both a rapid gallop, or a slower, sludgier jog like 'Chain of Fools' or 'When All Hell Freezes Over'. Whatever your preference, it's likely Tank has you covered fairly well. But with almost every album, a few listens-through provide a few strikes against it. Ward's vocals, while almost always good, can get a bit silly the more guttural he goes. This is sometimes a shame because his clean vocals (seen on 'W.M.L.A.') are often equally as fitting for the music as his bellow. As a NWoBHM album, Honour and Blood occasionally delves into contrivances with some of the guitar work, but it remains almost always creative even at it's worst (even 'Too Tired to Wait for Love', possibly the closest they get to a ballad is fun as all hell). Of course we also have to take into account the time period; it's pretty obvious that the 1980's inanity would weave itself into the music at certain points, such as the glam vocal choruses and sometimes ridiculously cheesy lyrical themes (though 'Kill' is an extremely dark tune lyrical-wise for the time). These factors might bog a lesser album down to a much lower quality, but Tank's sound and presence is just so much more creative than others that, even through the lowest points, you're still cheering these boys on.

And so, the war drags ever on.