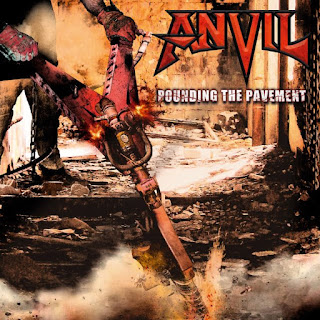 DISCLAIMER: because this is Anvil, a band that holds a very special place in my heart, my words are bound to be much less formal and a bit loose as I will tend to ramble. Be warned. Also happy new year.

Ever since the release of the 2009 Netflix documentary "Anvil! The Story of Anvil", the sad tale of misfortune about the talented 80's group Anvil has garnered them the success and support that they've been seeking so dearly for almost 40 years. The members of Anvil have been very keen on stating how ecstatic they are to have found their success on numerous occasions through interview after interview. Hell, their newest effort is titled "Pounding the Pavement", a title that frontman Steve "Lips" Kudlow postulates is referring to him "rustling up business for forty years and staying at it". That must mean, undoubtedly, that the product of this newfound success that is even titled as an acknowledgement to said success should be a glowing symbol of Anvil's victory. It should.

When bands like Slayer and Metallica started out, it only took them five or less years to have the hype of mainstream popularity hefted onto their shoulders. As such, they were rather quick to the mark to familiarize themselves with not only the expectations for themselves, but the expectations other put onto them. When Anvil, a band so good during the same time that it influenced the two aforementioned examples, received no such popularity. Though stagnant in this regard, Anvil was nonetheless able to forge on, providing continued quality for the past several decades. But now that Anvil has gained a somewhat of a higher level of popularity, with them providing live show after live show with an attendee count higher than anything they would have gotten in the 80s, the staleness that usually hits a band after an extended amount of time under the same level of popularity has hit Anvil drastically in a matter of a few years.

Yes, it's rather unfortunate, but this album is likely the worst Anvil album yet. It's surreal to say as just two years ago Anvil is Anvil hit the scene and was, although a run-through of Anvil's signature traditional heavy metal sound, a still creative and rather entertaining release. Songs like 'Up, Down Sideways' and 'Fire On The Highway' remain exemplary tracks in the band's repertoire.

However with a lapse of creativity and a far more boiled down production, Pounding the Pavement lacks much of the charm and authenticity of it's predecessor. For one, this has to be the absolute worst Anvil lyricism yet, and that is definitely saying something. This is made clear with each time Anvil moves anywhere close to the political spectrum, such as on 'Ego' (likely the most laughably bad anti-Trump anthem put to music- "change your diapers", yikes) or on 'Don't Tell Me' (a lambasting of "fake news"). It isn't helped that Lips' vocals are seemingly more on the forefront of the sound, giving him ample opportunity to let loose his extremely cringe-inducing lyrics and similarly downsizing his fellow bandmates' place in the fray. With all that taken into account, Lips' vocal delivery isn't even that good. While adopting different tones and inflections on Anvil is Anvil (such as the Mustaine-esque one on 'Fire on the Highway'), his delivery seems to remain very bound to his default rasp that gets extremely grating, especially as it's not quite intimidating enough to come off as genuine.

Aside from the lyrics and vocals, Pounding the Pavement missteps in quite a few other areas. The aforementioned production muddies the overall sound quite badly. Chris Robertson's bass is almost completely drowned under the drums and guitar, giving him little room to be heard at all. Secondly, the charming songwriting that usually propels Anvil out of the halls of mediocrity have fused them to the spot on this one. On one end of the spectrum the songs are completely hook with little to no filling, i.e. trotting out the same (relatively boring) riff ad nauseum for three or so minutes. The other end sounds like what I believe my friend Khaliq put best: "a glam metal band comeback- and not a good glam metal band". 'Doing What I Want' is very true to the latter, with pseudo-swagger being backed by a contrived staccato riff. Other tracks like 'Rock That Shit' have a horribly cheesy arena-rock tone that would fit something done by latter-day Poison.

The magic that Anvil had on previous releases might be a bit stagnant here, but it doesn't mean that some things weren't objectively done right, particularly concerning the Anvil trio itself. Robb Reiner. All that needs to be said is that name. Reiner is perhaps the most underappreciated and balls-to-the-wall drummers to ever grace heavy metal, and his performance on this record is the biggest driving force keeping me going through it. On the other hand bassist Robertson, I believe, will never ascend to the greatness that was Glenn Five, nor will he get a truly explosive track like 2001's 'The Creep'. Definitely not with this sort of songwriting or production. It seems like that even in songs where his bass must be at the forefront like 'Warming Up', he's pushed unceremoniously into the background as he tries desperately to follow with Reiner and Lips. In the guitar section, Lips is still rather on top even if his riffs are fairly contrived. It is still wise for him to follow the advice that many have given him over the years and obtain a second guitarist as to add dynamics that Anvil so badly needs.

Song-wise, there's a few standout tracks here. The title track instrumental is a classic gallop of a tune, hitting quite a few good strokes in its grooving runtime. The cowbell is a nice, earthy touch too. 'World of Tomorrow' is a big, monumental track that's kind of funny with this hard-ass riff being the background to moments like Lips weakly shouting "peace and love!!!!" Nevertheless its pounding nature and the impressive clashing guitar tones towards the second half make it stand out quite well. Other than that, the tracks have a bad tendency to bleed into one another, or stand out in a not-very-positive way.

That ends this ramble. I must stress that I did very much want this album to be as good as Anvil is Anvil was. It just wasn't. Hopefully, this is not a signalling of Anvil breaking their near-perfect forty-year streak of good albums, because that would really be a shame. Knock on wood.