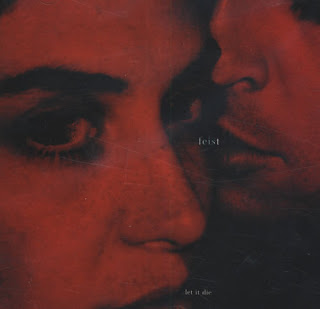 One of my fondest and youngest memories is a day when I decided to hit the old country roads one particularly humid day in July. The air was filled, not only with heat, but also with the cacophony of bugs hopping helter-skelter through the tall meadow grasses. As usual, when I take time to actually step out of my troll cave, I need a soundtrack to accompany me. I chose a recently purchased CD I had nabbed at the thrift store a few towns over, which attracted me with its mysterious cover art and blunt title. It was on this day, moseying past shabby, peeling farmhouses, rows of young apple trees held up by metal apparatuses, and dense, messy fields of yellow and green that I found myself listening through the entirety of Leslie Feist's Let it Die.

That same week I'd listen to Let it Die on repeat. 'Mushaboom' would be the theme for housework. 'Inside and Out' would be a incongruously cheery soundtrack for the boredom behind unfocused eyes looking through a car window. 'Lonely Lonely' would be a replacement for the silence of laying in bed and staring at the ceiling in the dark. It was truly an odd but introspective time.

It was unlike much of what I had listened to before then, which was mainly progressive rock and heavy metal music. I would consider what Feist did to me that day to be akin to when Pink Floyd triggered my insatiable hunger for artful music a few years prior. That is, this album was able to show me the less grandiose and more restrained side of pop music. It did this by showcasing a veritable rainbow of themes throughout its tracklist. The album bounces from lethargic, softspoken indie pop like 'Gatekeeper' and 'One Evening' to disco power ballads like 'Inside and Out' (originally a 1979 Bee Gees cut) to even a cover of Françoise Hardy's 1963 funky French pop song 'L'amour ne dure pas toujours'.

Although the album skips around a lot thematically it remains fairly grounded in Feist's homebrew indie sound (which sounds a bit like a Canadian, white-collar Björk with more rock). This generally entails Feist leading the melodies and really the song with her flagship guitar and commanding vocals, with very small accompaniments like minimalist percussion (sometimes just hand claps) and subtle uses of sax or piano here and there. The centerpiece of the performance is Feist herself after all, so rather than having a full band of competing musicians she instead restricts them more as an illustrious background than anything else. Feist and her band bring in elements of bossa nova and chamber pop with her timid indie attitude to create a heavily stylized singer/songwriter sound that channels cute, juvenile attitude, sensuality and bittersweet longing all at the same time.

Let it Die falls into the category of personal gems rather than objectively perfect gems. The album is brilliantly crafted and has a great attention to detail, but it holds more of a place in my heart more than it ever could in my head. Like I thank The Wall for opening up my eyes, I thank Let it Die for opening up my heart.

Written on February 20, 2018 for Frying Pan Media
fryingpanmedia@gmail.com
To bright tomorrows.
Written by Unknown at 8:19 PM