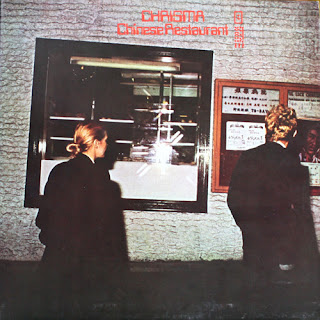 
Steeped in the krautrock-isms of their German neighbors, the Italian duo Chrisma (later known as Krisma in the 80s as they got more and more glamorous and kool) got help from Vangelis' brother Niko Papathanassiou for their debut singles 'Amore' and 'U' in 1976. These singles snagged a few features on splits with such artists as...The Chanter Sisters(?) and even, surprisingly enough, Black 'freakin Sabbath. Don't quite know how that happened. Either way these singles, 'U' in particular, got enough traction for this married couple to be slated for a debut LP in no time at all.

What emerged in the wake of the two, pop rock/disco singles was a surprisingly dark and art-punkish album. Oddly enough it seems Chrisma pulled a 180 and went the direction that Television and Wire were going in the same year and put their foot in the door of the up-and-coming post-punk trend (that was ironically enough occurring at the concurrently to punk's infantile stages). Chinese Restaurant bears a few similarities not only to fellow European synthpop and post-punk groups like Joy Division, but also to the more protopunk bands of the progressive rock boom in the early end of the decade. It does make sense when you do some lightdigging into the history of Maurizio and realize he himself produced some rock progressivo Italiano himself between '70-'73. Above all though the aforementioned krautrock undertones are the most pertinent with a heavy Can influence with, not only the fact that Maurizio sounds beautifully like a stir-crazy Malcolm Mooney on tracks like 'What For', but also with the use of repetitive, spacey guitar hooks following machine-like percussion hearken back to what Can were doing circa Monster Movie. Similarly, songs like 'C-Rock' and 'Black Silk Stocking' have a distinct Neu!-ish quality to them.


Regardless of where Chrisma got their influence, their debut is packed with all sorts of musical goodies. The suave Italian nature of the musicians, combined with methodical ways the melodies play out with either quiet, soft vocals or monotonous, sarcastic monologues make it quite an enjoyable experience. The album is all very modernist, with each song sounding more like a bunch of TI-30s punching out a roll of mechanized melodies. Ezio Vevey's fuzzed out riffing, while fairly proficient, is noticeably tightly bound to the staccato percussion, creating something of an almost hypnotic musical environment. I realize many post-punk bands at the time also used a similar method, but how these guys differntiates themselves from said bands is how they utilize their prog influencers, like the touches of Kraftwerkian progressive electronic on songs like 'Lycee' and 'C. Rock'. Slightly proggy, krautrocking post-punk is what Chrisma goes for here, and while they can stoop to overbearing levels of repetition and musical meandering at some points, the end result is overall still fairly pleasant and intriguing.

Written on February 24, 2018 for Frying Pan Media
fryingpanmedia@gmail.com
To bright tomorrows.
Written by Unknown at 10:40 PM