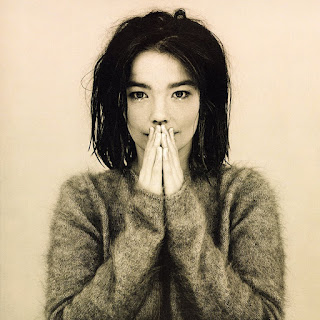 The secret to this Icelandic woman's appeal is not one sole reason, but rather several small reasons that form a larger whole. Like a puzzle with a thousand multicolored pieces that form Botticelli's The Birth of Venus when put together. Her public image as a quirky, slightly crazy woman going WWE on reporters who harass her, her surreal music videos, and her seemingly endless supply of creativity that makes each of her studio albums different from the last have created the character of Björk Guðmundsdóttir as we know her today.

Her debut Debut is, other than being the springboard from which Björk and her listeners started their adventures, the clearest insight into Björk's musical sensibilities and her ideas for where she'd take her career. It's certainly different from her Siouxsie and the Banshees-esque post-punk career in Tappi Tíkarrass and later The Sugarcubes (who disbanded a year before Debut's release). Though it's clear Björk synthesized much of the playful and humorous nature of The Sugarcubes into her persona, Debut is a contrastingly eclectic affair then anything she had previously produced or been involved in.

Björk's first record is her first showing of her head-over-heels attitude towards experimentation, albeit is a bit more grounded in reality than her latter-day antics like the entirely a Capella Medulla or the bloated ambiance of Vulnicura. Part of it is sort of reflective of the time's zeitgeist- tracks like the killer 'Big Time Sensuality' or 'There's More to Life Than This' are unabashed dance-pop tunes with Björk's flavorful vocals overlaying house-like beats. At the same time though there are times where Björk opts for more folksy, tasteful sonics like the hedonistic 'Venus as a Boy' or the gentle, harp-driven lamentation of 'Like Someone in Love'. This variation from one track to the next keeps this album more fresh and interesting than even some of the albums I keep closest to my heart.

It is the tone of Debut, and similarly all of Björk's music, that evokes the most quality. It becomes clear quickly with the album opener 'Human Behavior', a beautiful mess of a song whose jazzy textures provide the backdrop to Björk singing about the illogical nature of human behavior, but also it's irresistibile and satisfying qualities. It sets the stage for Björk's lyrical and vocal motifs for much of Debut, as she sings her heart out about sexuality and the eroticisms between humans that she, as she's stated in many of her interviews, is fascinated with. All of this is done though on a much more childlike, naïve nature, like the perspective of a Martian experiencing said things for the first time. The thing about all this though is that Björk's singing voice isn't even that great. Sure she can kind of hit high registers and hold notes well enough, but what hooks me more than anything is her pure and vigorous passion with which she cranks out her performances. She becomes practically possessed by her own music, snarling and screaming her lyrics for the entire world to see. It makes her more endearing than 75% of her peers in the craft, and makes her more of a musician than I think most of us'll ever be.

Debut is erratic, haphazard and a tad stark raving. At the same time though it holds up, not exactly as a superior to Björk's later work, but as a young and creative woman's musical insight into human romanticisms, which are funnily enough as puzzling as Björk herself.

Written on February 21, 2018 for Frying Pan Media
fryingpanmedia@gmail.com
To bright tomorrows.
Written by Unknown at 11:34 PM